GuGu Kim working with dry charcoal and his fingers at H Gallery in the Gangnam district, south of Seoul [PARK SANG-MOON]

GuGu Kim, 53, is a finger painter, called jiduhwa in Korean, who only uses his fingers to create his works.

He works on large canvases, so uses a ladder and paints with dried charcoal, pastel and stone dust.

His paintings are considered representative works of art in the modern classicism genre and are praised worldwide. 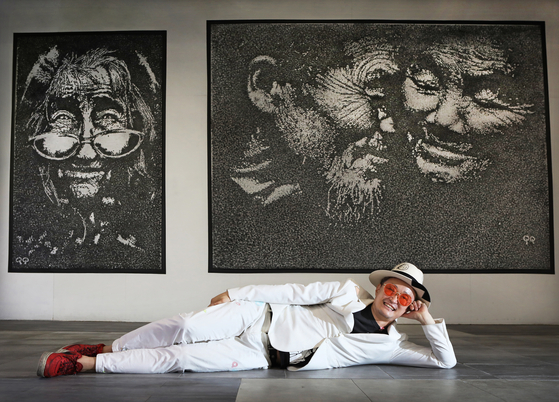 Kim’s pieces portray a sense of deeply focused pure beauty. An iconic aspect of his works is the use of monotone colors such as black and white.

The principles of light and dark, black and white, ying and yang skillfully and harmoniously used in his works, provide a window into his unique artistic world. For example, the concept of ying and yang is shown through the black paint and the empty white spaces on the canvas that make up a single painting.

Kim was born in 1970 in a small village in Gwangju. He believes his finger paintings started when he was a young child when he used to rub charcoal from the kiln with his fingers and even draw with it.

Having an interest in music and art growing up, Kim began forming ideals about Japan, especially after seeing photos of Tokyo’s Rainbow Bridge.

He left to further study his passions at a vocational school in Tokyo after graduating from college in Korea. He studied subjects such as contemporary art, fashion, space design and architecture at Mode Gakuen.

He had to work part-time until three or four in the morning to pay his school fees, but endured the hardships of his passions.

He drew his own works at this time, but only as a hobby. He had no idea that he would become a painter one day.

Kim traveled between Japan and Korea to find work here and there, until 2000, when he was able to open his own fashion show in Seoul with locally acclaimed male model Do Shin-woo.

The show received a good response but had strained Kim financially. He returned to Tokyo with just 10,000 yen ($67.30). Devastated, Kim spends the days leading up to the show like a prone corpse.
Then one day at dawn, he had a transformative experience that made him decide to become an artist. 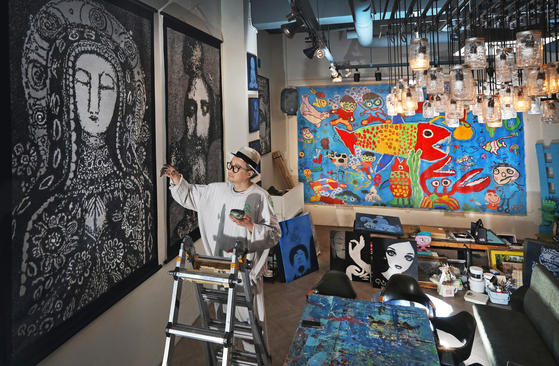 GuGu Kim works on a large religious painting at the H Gallery in the Gangnam district, south of Seoul [PARK SANG-MOON]

He had drawn a nude with his fingers early in the morning. When he finished and the morning sunlight shone on his finished painting, he realized he had done something beautiful and that was the type of art he wanted to create.

He exhibited his finger paintings at a small exhibition in a cafe in Korea and they all sold out.

From that moment he officially started his career as a finger painter and has been pursuing this work for over two decades now. 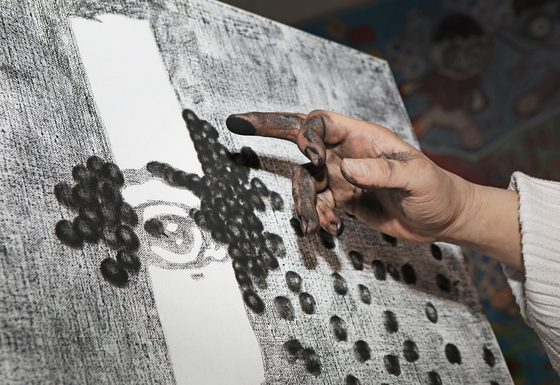 While jiduhwa refers to painting with hands and fingers in black ink, Kim’s works deviate from the traditional Korean method as he only uses his fingertips.

In more literal terms, his method is a type of dry pointillism that uses materials such as dry charcoal. This is why he calls himself both a finger painting and finger stamping artist.

The central motif of Kim’s work is everyday life – all that people hear, see and imagine as well as human joys and sorrows are reflected in his paintings.

This is because he paints spontaneously with the emotions and sensations he feels at the time. Such emotions are often best represented in the facial expressions of subjects in Kim’s works. Even the fish that Kim paints have an expression. 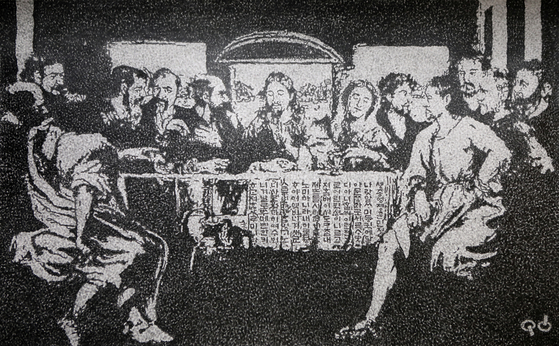 Painting by GuGu Kim depicting the Last Supper with Jesus and his 12 disciples. He drew in hangeul, in other words has Korean characters, on the tablecloth. [PARK SANG-MOON]

His works also incorporate Korean aspects. It uses natural ingredients that have been around for a long time like charcoal, pastel and stone powder. It also uses woven linen canvas sold in rolls instead of the framed type.

Koreans are traditionally referred to as a “white-clad race”, meaning that ancient Koreans wore white and revered the color. Kim’s monotonous paintings accentuate this Korean quality while following the principles of ying and yang. But Kim says his works have interpreted these traditional Korean styles into something more modern through a process he calls “New Koreanization.”

Some of Kim’s most iconic pieces include realistic depictions of religious figures such as Jesus, Saint Mary and Buddha.

Robert D. Mowry, curator at the Harvard Art Museums, highly praised Kim’s creativity, calling him “the representative finger painting artist of that era” and “a pioneer of modern classicism whose works seamlessly fuse past and present”.

He continued, “Kim showed a whole new concept of art. I believe he will blow a new wind in the world of finger painting with his creative and unique works.

Kim currently has two goals. One is to create an art museum specifically for works of art depicting religion. Although most Koreans are religious, there is no museum to display religious works and preserve them, Kim said.

His second goal is to open permanent art museums in 99 places around the world where his works can be exhibited and eternally preserved. Kim calls the museums the “99 Art Museum“.

Having held special exhibitions and solo exhibitions in countries like the United States, Japan, China and India and at the 2019 Venice Biennale in Italy, he recently opened the “99 Art Museum” in Paju , Gyeonggi.

Kim said her ultimate dream is to elevate Korea’s dignity through the power of culture.

‘Mourning into Morning’ is the new art ...