Saturday, September 24 was a day of perfect weather for the Robbie Powwow Garden collection of artists and patrons at the Buffalo Bill Center of the West. That morning, 26 artists gathered in the garden and the huge tent erected in the parking lot for the Buffalo Bill Art Show and Sale’s Annual Quick Draw and Brunch.

Customers watched artists bring their pieces to life. By the time the art auction began at noon, the excitement was palpable. Auctioneer Troy Black announced that Friday night’s bid total – $1.032 million – was a new high for the 41-year-old show.

The Quick Draw No Reserve auction raised $89,350 from the art created that morning. Additionally, Saturday’s silent auction brought in at least $27,950 – even more than Friday night’s silent auction.

Andrew Bolam’s “Spirit Guide” and Michele Usibelli’s “Fire Hole River Bison” were the top-selling individual pieces on Saturday, with each painting costing $6,000 apiece. However, the highest-earning artist in the quick draw was sculptor Chris Navarro, who sold at least 17 casts of his next bronze piece, “Wyoming Native,” for $1,000 each, for a total of $17,000.

The Navarro and artist LaQuincey Reed bronzes will be limited editions. Customers had the opportunity to buy bronzes until Saturday afternoon. 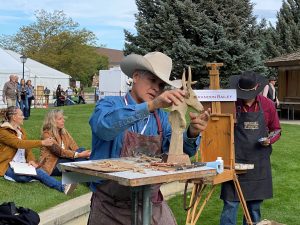 Based on the final prices from the live and silent auctions, the 41st Annual Buffalo Bill Art Exhibition and Sale raised more than $1,196,815 over two days.

The 2021 show’s total revenue topped $1.5 million. The final total for 2022 will definitely be known as soon as the tens of thousands of dollars raised are counted. 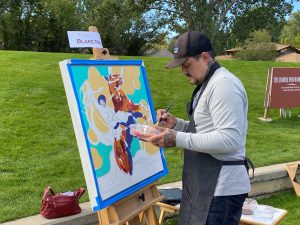 An innovative program in Bogotá Cares For ...